History of Liberton Kirk and Halls

area where the present church stands.  The design on one of these, which is now housed in the Museum of Scotland, is part of the church logo, and features on the glass doors into the church, and elsewhere.

The first recorded evidence is the Great Charter of Holyrood signed in 1143 which refers to a chapel at Liberton, which had belonged to the Parish of St Cuthbert, being granted by King David I to the Abbey of Holyrood.

At the Reformation, Liberton became a parish church. A sketch of the old church by Andrew Kerr shows a building consisting of a tower, first topped with wood and later with stone, and a centre aisle. A number of side aisles and galleries each with its own outside stone stair were added to the main body of the church in 17th and 18th centuries by various landowning families.

The tower was struck by lightning in August 1744 so a new bell was installed in 1747, made by Henderson and Ormiston. This bell was subsequently incorporated in the new church building.

The old church was demolished in 1814 and a new church designed by the architect James Gillespie Graham was built on the site. The foundation stone was laid on 27th January 1815. It is not known exactly when the church was officially opened and dedicated.

The building was altered in 1882 at a cost of £1,200, by reducing the size of the gallery. This reduced the number of seats from 1,480 to 1,000 so the seats had to be reallocated to the local landowners known as heritors.     The plan of the new allocation is on view in the church gallery. In 1958 the seating was reduced again (to about 900) to create more space around the communion table, and the latest refurbishment project in 2007 removed the pews from the south east and south west corners and cut new aisles, reducing the seating yet again.   The church now has a capacity of about 720.

On the bicentenary of the present building in 2015 a stone cairn was erected at the south west corner of the church commemorating the “living stones” past and present who make up the church in this place.

By 1885, the Minister, Dr William Gray, saw the need for a church hall. This was built in 1888 with the aid of a grant of £600 from the trust fund formed from the estate of Miss Anderson of Moredun and a further £600 raised by the congregation.  It was officially called the Anderson Church Hall in recognition of the bequest.  The Small Hall was added in 1929 together with a new kitchen and cloakrooms at a cost of £2,000. A third hall and enclosed tennis verandah were added in 1954.   More recent alterations have transformed these buildings into the Kirk Centre which now incorporates the Kirkgate Café.   The garden at the back of the Kirk Centre is known as the Centre Court, in recognition of the previous existence of a tennis court.

In 2014 a book was published, “Liberton Kirk :  A Good Place to Be” by Richard Purden, which set out the many influences, both historical and recent, which have created the church which exists today.   This can be obtained from the church office (tel. 0131 664 8264) – the cost is £10.

“In Memoriam: Jessie McFarlane” is a book written in 1872 to commemorate a forgotten Edinburgh girl who became a preacher at the age of 17 and drew crowds in Scotland and England. She married Dr. David Brodie who was a pioneer in juvenile mental health in Scotland. He established a home for ‘juvenile imbeciles’ at a house in Kirk Brae, now called St. Hilda’s. Jessie died in Liberton of tuberculosis in 1871, aged 28. “In Memoriam” tells the remarkable story of her life and is held in the National Library of Scotland. A copy can be read here.

The main repository of these records is –

Statutory registers of births, deaths and marriages from 1855

Most of Liberton Kirk’s historic records have been deposited in the National Records of Scotland.   They are principally held under reference CH2/383. The holdings include –

They have a copy of –

This includes a plan of Liberton Kirkyard, details of the monumental inscriptions and the 1694 Poll Tax records for Liberton.

Burial records are also a useful source of information when researching family history. Liberton churchyard has over two hundred gravestones, all dating before 1855, and there are a few inside the church itself.    The Liberton Kirk Archive (see below) has a Liberton Kirk Churchyard Details.

An adjoining cemetery was opened in 1878. Burial records for Liberton Cemetery which date from 1862 to the present are now controlled by:

Requests to access burial records can be made by letter or email giving the name of the deceased, date of death and the last address of the deceased if known. A search fee is charged.

Burial records are also a useful source of information when researching family history. There is a Liberton Kirk Churchyard Details at Liberton Kirk which includes gravestone references and a layout of the churchyard.    A transcript of the monumental inscriptions is also held in the archive. 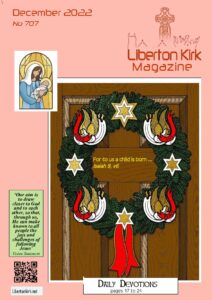 If you want to see more reflections, just go to the Reflections page on our website.

Theme: The Spirit of the Lord (Isaiah 61)

Take a walk round the Kirkyard, starting at the door to the Offering House and read a passage from Isaiah 40, specially chosen for Advent, with thoughts and prayers.  If you can’t get to the Kirkyard, click on the picture below to read it.  You can read previous Words for Today by clicking here.

Did you know that Liberton Kirk is now registered as an Eco-Congregation?   For more information on what this means for us all see the display in the Offering House at the Kirkyard Gate.

News Extra sheets available to view or for download