The trouble with praying in public is it can make us feel very vulnerable.Mark tells us how, on one occasion, the disciples felt very vulnerable indeed. A man had brought his troubled son to them while Jesus was away up a mountain, but when they had prayed for him to be healed, nothing had happened. Jesus returned to find them feeling rather foolish and surrounded by a scornful and angry crowd. Fortunately, he was able to step in and save the day.

Mark tells us that, later on, they asked Jesus why the boy hadn’t been healed. His reply is a bit confusing. “This can happen only by prayer”, he said (Mark 9.28-29). What did he mean? Had they not done just that and nothing had happened?

The clue to what Jesus meant is in the footnote at the bottom of the page, where we are told that some manuscripts had Jesus words as, “This can happen only by prayer and fasting.” In other words, it wasn’t their public praying that was the problem, it was the fact that it had not sprung from a lifestyle of prayer and fasting. They hadn’t been taking their own prayer life seriously enough. They hadn’t been getting the basics right.

Jesus took his own prayer life very seriously indeed. Throughout Lent we bear in mind the 40 days Jesus spent praying and fasting in the wilderness before he was even ready to begin his ministry. This was time spent tuning into his Father’s will, and opening up his life to his Holy Spirit’s power. Throughout his ministry we are told how he began every day alone in prayer. Before he died he spent the whole night in prayer, getting himself ready for the ordeal that lay ahead.

How seriously do we take our own prayer life? As you can see from the diary of events, during Lent there will be plenty of opportunities for us to meet together in public prayer. Every Tuesday the McDonald Room has been set aside as a place of prayer at various times throughout the day. The whole week before Palm Sunday has been set aside by all the BIG Idea churches as a time of 24/7 prayer, (tying in with the city wide prayer initiative organised by Trypraying). We will begin each weekday with an early morning prayer time at the Blythswood shop, and then each church building will be open in turn. Liberton Kirk will then be open for prayer from 8.30am on the Friday, and will be open for prayer until 8am the following morning.

But if this is the only time we plan to spend in prayer, all our efforts may well come to nothing. Public prayer is important, but only if we get the basics right. We also need to take our own private prayer life seriously. The more time we spend in private prayer, the more God will be able to use us. The more time we spend praying together, the more it demonstrates that we are ready for his Spirit to move among us. Does prayer always work? It depends how seriously you are willing to take it. My prayer is that you come to know more and more of the joy of God’s living presence in your life as you journey through Lent towards Easter. 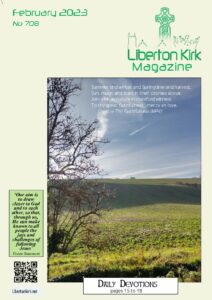 If you want to see more reflections, just go to the Reflections page on our website.

THE WORD FOR TODAY

A new Word for Today is now in the Kirkyard, starting just beside the Offering House door, near the main gate.   The Bible passage is Ephesians 3, 14-21, which is Paul’s Prayer for the Ephesians.  If you are unable to come to the Kirkyard you can read the text by clicking the picture below.   You can read previous Words for Today by clicking here.

News Extra sheets available to view or for download